First of all, I have to say, I LOVE survival mode. I’ve learned more about Minecraft (and about myself) in survival, both in singleplayer and multiplayer worlds, than I ever have in creative mode.

I am an explorer, not a builder. I know how to build basic things, but it doesn’t really interest me. I tend to only build in one style (medieval/cabin) when I build something formal, and most of the time what I build are shelters where I’m exploring. When I find a good place, I’ll hole in somewhere and explore the area or mine until I get tired of it. In our EVO world, I hadn’t built anything myself until I got to an island in the middle of the sea, where I built a shelter in a cave.

Most of the time, if night falls while I’m exploring, I build a tower of gravel to stand on. I use gravel because I can get some flint from it when I break it down to get back to the ground. If I’m the only one on the server at the time, I’ll make a dirt platform above the ground like this one, so I can make a bed and sleep. I try to always keep a good supply of wood and wool with me, as well as sand, dirt, cobble, and gravel. 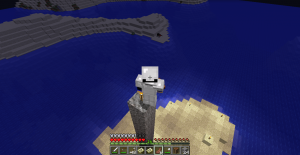 I was really frustrated in the early days of this server because it kept lagging really badly and causing me to crash. I tried making maps, but had a lot of difficulty with losing them. The one time I was killed was from lag, and I lost everything underground somewhere. Eventually I went back, accumulated more resources, made more maps, and started exploring again. These are the maps mounted in the Admin Building near spawn. 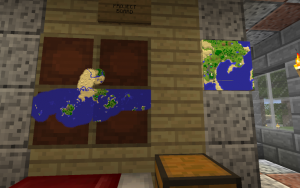 I take screenshots with inworld maps and F3 coordinates to mark waypoints and interesting places. On my computer, I move the screenshots to a different folder and sort them into subfolders depending on which server or realm they’re from. The screenshot below shows an ocean monument in the center, with nearby coordinates and the location (white arrow) on the map. The green arrow on the map shows where it is framed, so I can identify a home point when I’m away. 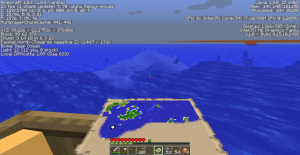 I really enjoy playing with the other people on this (and every other) server. I’m amazed at the incredible things that people build, and the resources they offer to others. I hope others will make copies of my maps and use them to explore. Apparently the recent update to Minecraft 1.9 added new map features–I can’t wait to use them!