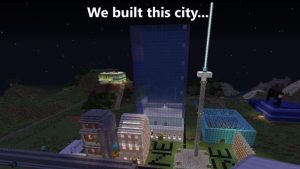 As I noted in an earlier blog, I was able to teach a one-week course in Minecraft at my middle school, twice a year. During the 2015-2016 school year, in the two courses on Minecraft and Media Literacy, I noticed some troubling episodes of griefing (other players who, innocently or maliciously, cause trouble for others.) Objects built in Minecraft do not have builder identifiers like those in SL and similar worlds, and anyone can make or break objects anywhere. When things are damaged, students often do not have the maturity to admit when they’ve done something wrong, which makes it really difficult to figure out who damaged something. I wanted to explore community-building in Minecraft to see if this could be addressed socially, rather than punitively. I decided that my 2016-2017 Intersession courses would be on Community Building in Minecraft.

I set up the course so we would be addressing community-building on two fronts: our community as a class, and the community that we would (literally) build in Minecraft. I again housed the course content in our Canvas LMS. Our school uses Capturing Kids’ Hearts (CKH),which involves building a social contract together at the beginning of each course. Even though we would only be together for a week, it’s a worthwhile process. I also had the students do a Minecraft experience survey and daily reflective writing. 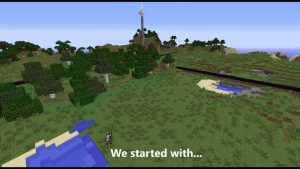 I spent quite a bit of time before the course started setting up a place for the students to build. I used the special MinecraftEdu blocks to make a border around a large area; lay down blocks to mark off and label 4 quadrants; and set up a survival hut in the middle. 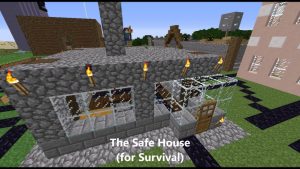 For the first day, they played in Survival mode for about an hour, then we talked about which resources we needed to survive, and how we could obtain them. We also brainstormed about the same things in the physical world. My reflection from Day 1 included this: “The Minecraft Experience survey showed a wide range of experience levels, but most students seem to be familiar with at least the basics of Minecraft. In the survival world, they did a good job of finding and identifying resources. For the most part, they played without incident. I was able to play, myself, which doesn’t always happen. One student told me later that he felt like he was being griefed by someone, but didn’t feel like he could talk to the person without getting upset. I suggested approaching any situation like that with the most charitable explanation in mind–in this case, that the person probably didn’t mean it and was trying to fix it later.”

My reflection for Day 2 included: “We spent about an hour playing in the survival world. I had meant to let them play for about 10 minutes, but we were all having so much fun that we just kept on going. Afterwards a really productive discussion developed about what contributions people had made to the community, how trade could be handled, and what jobs and roles are needed in a community. That segued nicely into talking about what buildings we need in a community. I showed them a map of [our small city] with some of the community buildings located, then we listed what buildings we could include in our Minecraft community. We then rated them as essential (yellow), luxury (blue), or in-between (green). The 6th graders left on a field trip at 9:00, so they missed most of the discussion and planning.

“Next, we started planning the community on paper. One student drew a grid, and planned a railroad around the perimeter. Other students cut out their planned buildings on paper and embellished them with markers. There was lots of discussion about building methods.”

On the third day the students divided up into smaller groups to design and build together. Some students wanted to work individually, which was fine. Once we got inworld, each group had to find a spot on which to build, and write down the team members’ names and the Minecraft coordinates for their group. They continued to write a short reflection each day. I asked guiding questions such as:

I found it worked best to have them do the reflection in the beginning of each class, about the previous day. That set the tone for the class, and gave them something to do while we got started. Of course, they weren’t being graded, so they didn’t have to meet any standards, but for the most part they wrote thoughtfully and quietly.

We had had some trouble with griefing, so we talked about it together but didn’t come to any conclusions or consensus about what to do about it. For the beginning of Day 4, I had them reflect on these questions:

I showed the students how to take and find screenshots of their builds, and I had hoped that they could put them together and make a short machinima like we had done for the Media Literacy course. They really weren’t too interested, and we just ran out of time. They could walk around inworld and visit each other’s buildings, and that made it easy for them to share what they were doing. This video shows some of their innovative ideas: http://www.youtube.com/watch?v=s1ce5ZROQJU

I’d like to say that we developed a close-knit and kind community in this course, but I really couldn’t conclude that it made much of a difference. That said, I do think that, for the most part, the students worked well together, had a lot of fun, and learned a lot.