I’ve been working on getting Minecraft into our school for about a year now, ever since I discovered for myself how (surprisingly) immersive and thought-provoking it can be. When our school system got a grant for a school calendar study which resulted in a twice-yearly Intersession week between quarters, the opportunity arose. I used Knowclue Kidd’s (Marianne Malmstrom) idea for real estate ads in Minecraft to teach some media literacy concepts. The kids had a blast playing, and even learned a little about how advertising techniques are used.

Once the new calendar was approved, the teachers and staff members were given one hour to come up with a plan for their intersession class. Each of us would be teaching a half-day class for five days. We had to provide fun activities that linked to our state standards. In just that short period of time, we came up with some amazing ideas! This was my submission:

7.3 The student will understand the elements of media literacy. a) Identify persuasive/informative techniques used in nonprint media including television, radio, video, and Internet. b) Distinguish between fact and opinion, and between evidence and inference. c) Describe how word choice and visual images convey a viewpoint. d) Compare and contrast the techniques in auditory, visual, and written media messages. e) Craft and publish audience-specific media messages

After learning about persuasive techniques in the media, students will build a house in Minecraft and create a video advertisement with machinima.

Are you tired of being manipulated by advertisers? Learn their tactics! Students will build a house in Minecraft and market it with a machinima real estate ad.

Getting MinecraftEdu installed and working felt like swimming upstream against a strong current. Our IT department was very willing and supportive, but had a lot of competing demands on their time. Eventually we hope to have MinecraftEdu hosted on a district server, but for this project I ran the server on my school-issued laptop. We used a 30-workstation computer lab, which I spent several hours configuring so the server IP address was already added when the students started the software. (The IT department set a fixed IP address for my laptop.)

We’re using the Canvas LMS (learning management system) this year in our district, so I spent some time creating a course with assignments and resources for this class. My class was scheduled for the last half of the school day, so I spent each morning getting ready for the class. For the first session, the students wrote a bulletin board post introducing themselves, and took a Minecraft Experience survey (created with Google Forms). At the beginning of the 3rd, 4th, and 5th days, they wrote a guided reflection piece, and they took another survey at the end of the class. Nothing was graded, but most of the students did a good job completing the assignments (despite some grumbling about having to wait to play.) 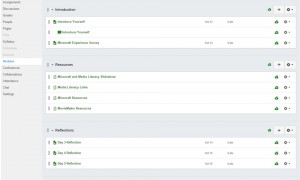 We jumped right in at the beginning of the first day doing the MinecraftEdu Orientation. This build offers a lot for all levels, getting the completely inexperienced users started, and providing puzzles for the experienced players to figure out. The students were required to use their own real names, with no gamertags or numbers. 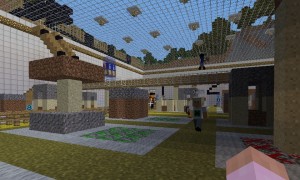 After we played for an hour or so, I stopped them and had them log in to Canvas to do the survey and introduction. I started talking about media literacy by saying: “You’re being tricked! Every day, advertisers try to trick you into spending your money, or getting your parents to spend theirs. Have you noticed how this can happen? How do you feel about this?” The students seemed really unaware of this, in spite of the vast amount of media exposure that most kids have.

The next day I played some real estate ads that I found on YouTube (available on this playlist https://www.youtube.com/playlist?list=PLSn_3qRXdgj1DKid15BFNrHVqfSsFxaWp), asking them to look at some elements of video media  (lighting, editing, sound, language used, what is featured, camera shots). We talked about features of houses, and generated lists of essential, advantageous, and luxury features that they might want to include. I played Knowclue’s machinima of her students’ Minecraft real estate ads to show what we were aiming for. Here’s what Knowclue said via email about her class’s process:

> I gave my 5th graders 3 class periods to build any single dwelling house they wanted on a single account. Since we are a 1:1 school I allowed kids to use mods as well if they had them on their personal computer. Didn’t feel that piece mattered for this project.
> We spent one class period looking at array of real estate commercials from our town that I had preselected. The commercials represented a range of house types from apartments to higher end homes. Before we watched the commercials we did a quick brainstorm to populate 3 categories:
> What is essential? (bathroom, kitchen, etc)
> What is an advantage? (garage, en suite bathrooms, etc)
> What would be a luxury? (theater, tennis courts, etc)
> Kids generate the list pretty quickly and we use it for a reference when we watch the videos.
> I asked the kids to watch each commercial carefully to identify the language used, the camera shots and what is featured.
> It’s a blast to dissect each commercial – kids pick this up really quickly, without much prompting. They LOVE identifying on the conventions to “sell” – I gave them very little instruction, mostly just prepared to ask questions. Sometimes I would ask them to identify what kinds of word/phrases they used and after kids generated the list, we would rematch the commercial. It’s a really fun class and you can get through quite a few examples after you generate the list of needs to luxury.
> I give them one class to construct the commercials for their house. I let them choose to use video or pictures, most choose pictures as that is pretty much represents the commercials they saw.
> 5 classes – pretty straight forward. Just so you know the 6th grade ran a simultaneous challenge on OpenSim. I met with 6th grade twice a week and gave them 6 periods to build since the learning curve was steeper.

I had set up a random world in Creative mode for them to use. They were to explore, find somewhere to build, and give me the coordinates. Some students finished their houses that day, while others were still exploring at the end of class. Several students asked if they could work with a partner, and I encouraged this. I was pleased to see some new alliances developing by the end of the week, between students who didn’t know each other previously. 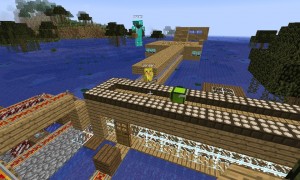 The students did reflections at the beginning of each class after that. The next day I showed them how to take screenshots in Minecraft, how to find their screenshots and transfer them to their storage drives, and how to make a machinima with their screenshots in Moviemaker. They followed the directions with varying degrees of completion. I was learning along with them, staying one step ahead.

We did have some trouble with griefing. A few players flew around to other people’s houses throwing eggs, which then hatched into a plague of chickens. A few people’s houses were partially destroyed, and the perpetrators would not come forward. However, the worst destruction was my fault–on the last day I accidentally saved the world as the previous day’s work, losing all of the building they had done that day. ARRGGHH!! The class as a whole was very willing to help each other out. The responses I got from the end-of-course survey showed that the students really enjoyed the class and thought it went well.

I’m not sure how much the students really learned about media literacy. At least now they’re aware that it’s a thing, and that advertisers use techniques to get them and their parents to spend money. We’re having another Intersession in the spring, and I’m thinking of focusing on civics and developing a community. We had trouble with Moviemaker: although the students saved their files, I couldn’t open them up to show them to the class, so we couldn’t do the sharing at the end. Instead, I opened the world in Survival mode (no PvP) so they could play. That was really satisfying, and the inexperienced players had a chance to try it out.

I learned a lot from teaching this course, and getting to know the students better. I would say that they all were successful–they have a new awareness of media, they developed problem-solving abilities, relationships and coping strategies, and they had a great time playing together. The end-of-course survey showed an overwhelmingly positive response. I’m looking forward to working with our students in Minecraft again.